Today’s programme is changed as I have to come back early .Original planning of  cycling in Bandra is postponed as I couldn’t got up early  to accommodate driving to bandra and back.

Last year I had gone to “ Leaping Windows” library many times.

“ Leaping Windows “ is  a kind of gift to Mumbai as it is the only Library dedicated to Graphic Novels. 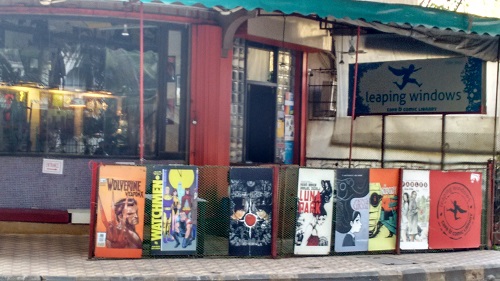 Started by Bidisha ( ever smiling and positive ) and her partners, “Leaping Windows  has two major sections : 1) Manga and 2) the American section.

Even though I had availed the Home delivery service, I had not left any chance to take detour and visit the library whenever I was traveling to that  sides of suburbs )

“ Leaping window “ is located in one of the lanes of Yaari raod “ the whole area is a kind of dead end towards versova sea and has nice tree lined lanes and roads.

I have  had this idea of exploring this part of Mumbai .

It  roughly starts from back side of Mega mall at Oshiwara and goes till Lokhandwala.

On right side there are mangroves and on left of the road there are high rise buildings.

At some places you have typical creek( khadi ) smell . 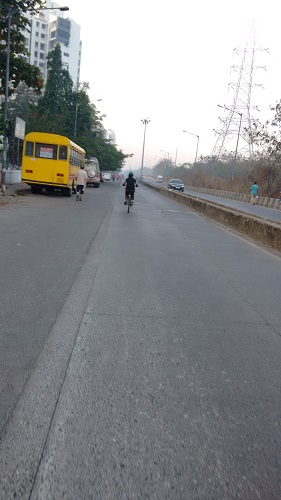 During the  morning time this road has a lot of  morning walkers, joggers and few cyclists.

At the turning towards lokhandwala one can see two perpendicular roads going away towards sea.

One is kacha ( not proper road ) road and has truck movement and other one goes to jankir….school.

I ride towards the school and reach to zone which looks more like dead zone.

“ there is a kucha road and your cycle can go “ informs the watchman at the school gate.

Going inside these kind of roads is always inviting but one is always afraid of the dogs of this kind of interior areas. This is still morning time and people are just waking up . Dogs still have special duties of barking and chasing away the strangers.

One with cycling helmet and sportswear does not look part of local surroundings and instantly attract dogs’ attention. 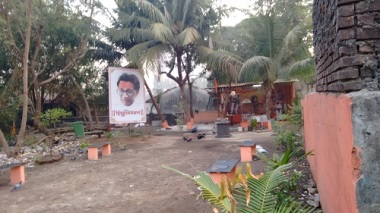 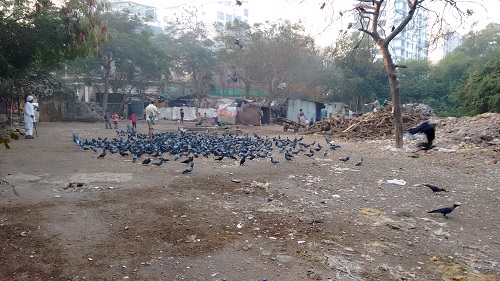 I am out at SVP nagar ( sardar vallabhbhai patel area ) .

Over the years this has become a film and TV fraternity area (with dedicated small patches of slums to cater to servicing the sector.)

There is a lively joggers park which caters to the  locals . 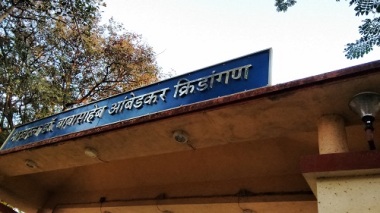 The road leading to jetty is narrow but full of life. The early morning is like peak morning time.

The shops are already opened. The goods are being moved. A lot of sea food related activity is going on. Ice plants have “ Ice delivery schedule “. There is a steady stream of office goers coming from opposite side ( from versova jetty towards Andheri (one of the the  large commercial and business areas of Mumbai ) the reverse traffic is also there. Overall there is an obvious issue of  cleanliness.

I ride with some care.

Soon I am at Versova jetty.

I am greatly disappointed. In past I have worked in Andheri west area. Going to four bungalows was an every day event. During the  period  I had seen a lot of areas within vicinity but never  visited Versova Jetty or crossed over to Madh island side.

The whole jetty area is congested, dirty  and ferry ride to Madh is kind of joke, It is hardly a distance. 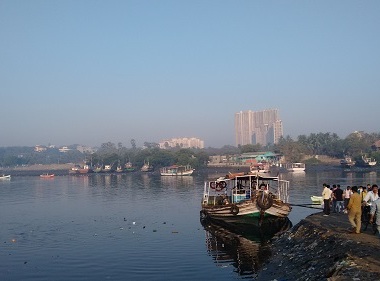 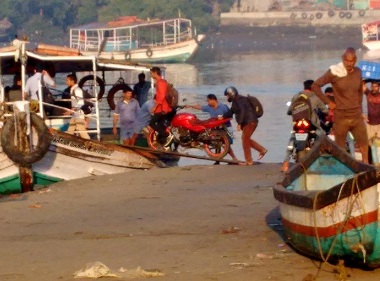 Something which can be easily covered by a bridge over the narrowest creek /sea location , here  people and vehicle have to board the boats ;by the time they settle down it is disembark /getting down time

There is steady stream of visitors coming from the other side. The two wheelers  are handled with great efficiency.

For every incoming boat once the incoming flow is handled, the boarding of people and loading of two wheeler from versova side is handled.

There is one Baba who has put of an innovative collection bag. Devotional ( Islamic ) qawali is being played which adds mood to the environment.

I return from an internal road ( Bandar( port) road )

The road is being repaired.

On this busy road I see one cat with kittens taking turns as she feeds the babies. There is traffic movement including the buses passing by but the cat and kittens are in their own world. 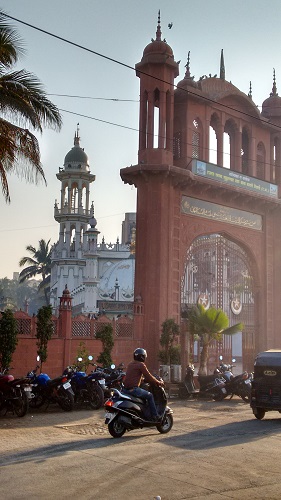 At yari road junction one can see karbastan ( muslim burial  ground ) and crematorium ( for  hindus) sharing the same zone with a road dividing the  marked areas. 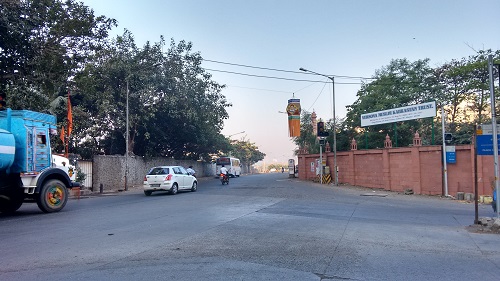 Cycling through the internal roads of yaari road is cool experience as not much traffic is there at this hour. 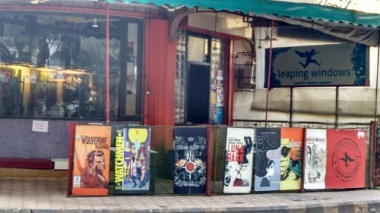 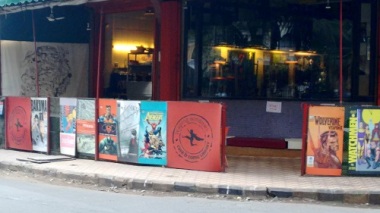 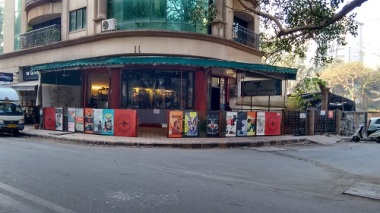 The internal road also meet the main versova jetty road at the fish market which is full of activity at this hour. 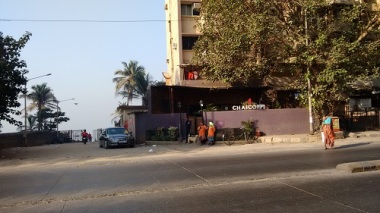 I take my cycle down to the   Versova beach.

I now have a different surface for cycling.

Since morning I am on asphalt roads, cement roads, pavement block patches ( very bad for all kind of vehicles ) and now I am on beach.

There are some patches with almost solid surface kind of feeling, where as other stretches either have sand or very soft surface. 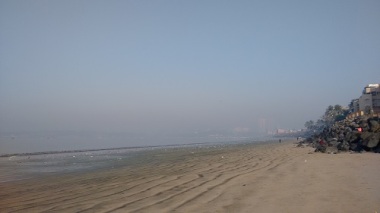 Sun is out and yes it’s bit hot because of my thin woolen ,which I remove so that I can enjoy the cycling.

Today I have liked couple of places for my breakfast break but they  are yet to open. The only restaurants which are open are typical udupi types which I want  to avoid.

At the  end  I have is salad and soup opposite to oshiwara joggers park at mr avinash dubey’s health food stall. 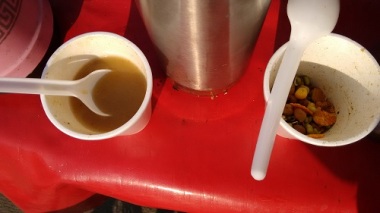 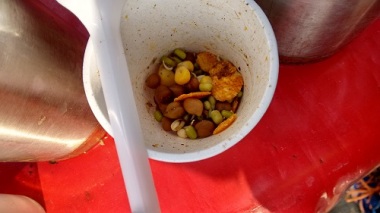 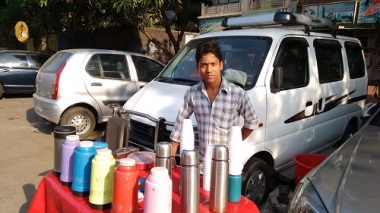 He has a different philosophy “ I work for morning 4 hours , targeting morning walkers and joggers, remaining time is to  enjoy”

“no, just have fun” he says

Post healthy  soup & salad I fold my cycle and decide to go back….

I have been active in the field of an engineering business and its various aspects since class 10. Innovation & creativity is what inspires me the most and that is a reason, I already own few patents and have applied for a few more as an ongoing process. Apart from being an engineer, I am a runner, certified marathon coach, certified functional nutritionist, traveler (who loves discovering new places and cultures by interacting and living with the locals ) a keen observer, trainer, and poet. I live in Mumbai View all posts by shailesh