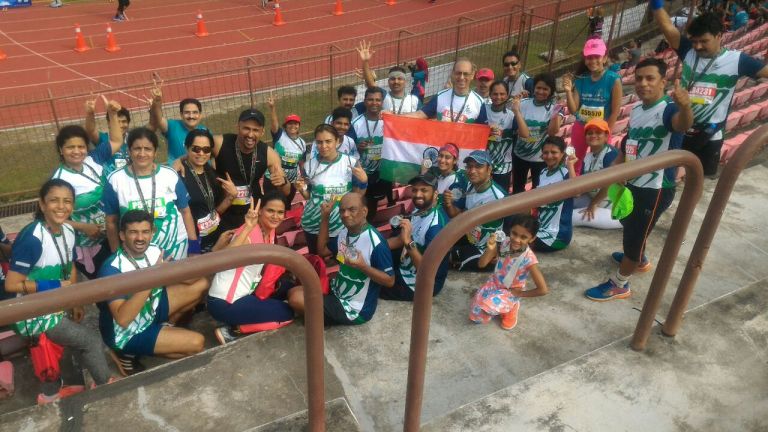 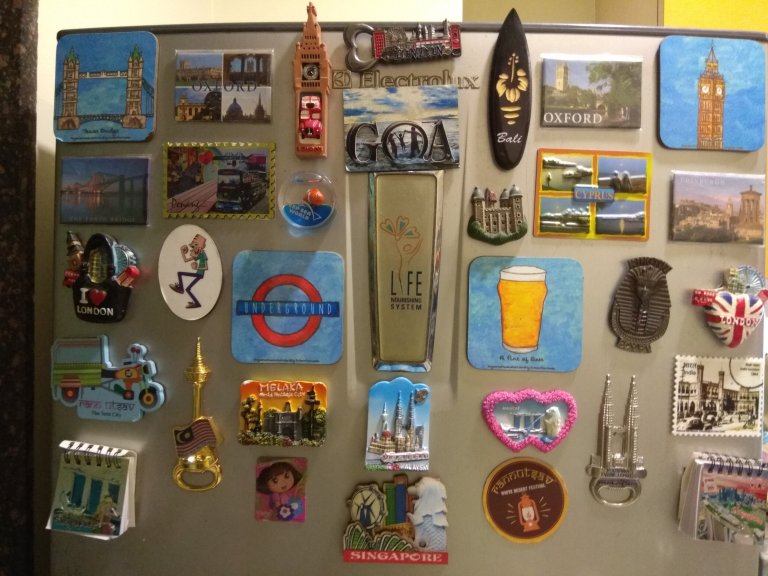 We all are at hotel lobby. 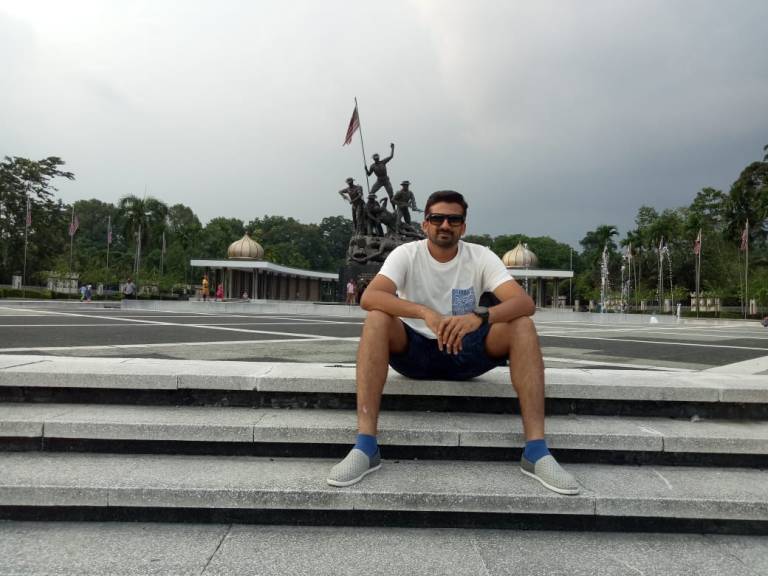 His reporting time is quite early. He is the lone full marathoner from the group.

For half marathon we have 4 am as reporting time as race will start at 5 am .The sun, the heat and the humidity wakes up really early in this part of world.

We all are in our coach ( bus ) .Bus cannot move without our local guide who is yet to come. They have some local rule which from Indian perspective is quite amusing.

We are dropped fairly near to the start point. Our start point is near Likas Sports Complex and end of the race is inside the sports complex.

BNPGR is now is full force. We have one of the largest circles and our latest coach sahiba Komal Adhikaari takes the control. We have our own synchronised group warm up exercises which are even copied ( or rather they join us from a distance ) by other runners.

Soon Mr Mandar (a fellow mumbaikar, now working in KL) meets us with great surprise ! Such a large group of runners from his home town Mumbai at an exotic place called Borneo!! It ‘s a small world.

We invite him to be our guide for morning run when we are in KL.

This is not going to be an easy race is an inner feeling. The feeling is based on weather conditions. {Later we get a nasty surprise when we encounter rolling hills in the university zone }. 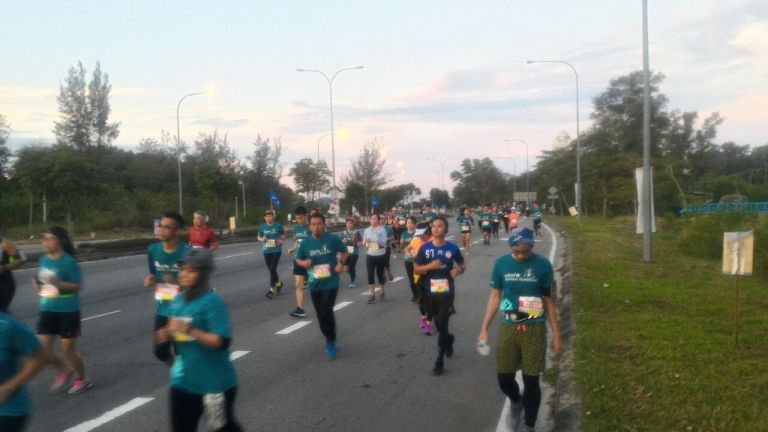 The initial roads are reasonably wide, but too many runners. We have typically Bandra sea link road kind of feeling during Tata Mumbai Marathon( Old SCMM ). One has to manoeuvre her or his way. We are running and passing by two round abouts.

We have started with “ Ganapati Bappa Morya “

It is interesting as well as surreal to chant “ Ganpati Bappa ….Morya “ on Borneo road at 5 .05 am where no other local/international group find their own equivalent trouble shooter god to praise !

So our ganapati bappa only prevails and now onus is on him to take care of every one apart from BNPGR !!

Soon Maheshbhai increases his pace. We are running almost with Adhikaris. Soon we are heading towards coastal highway as we are running through Jalan Istidat.The landscape is green , buildings are impressive and everything looks very clean. 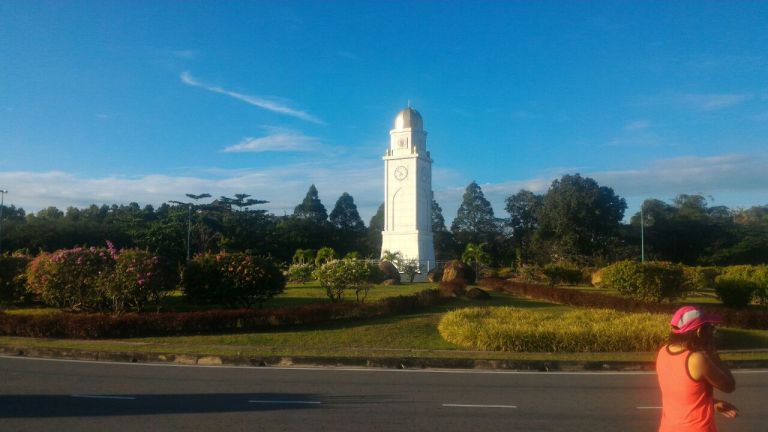 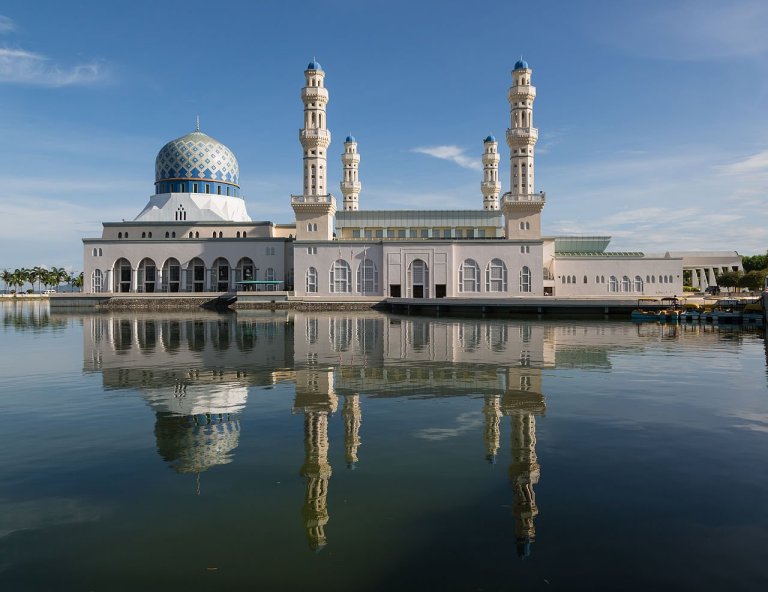 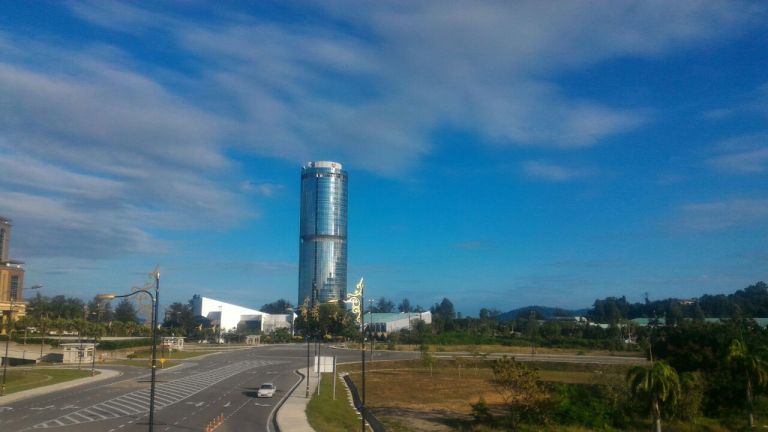 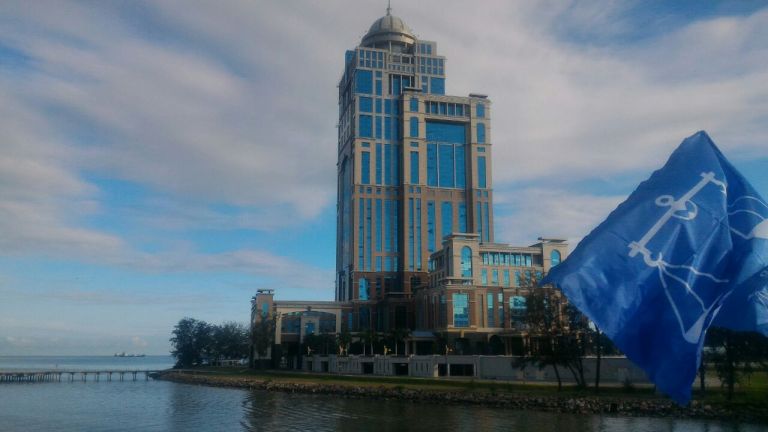 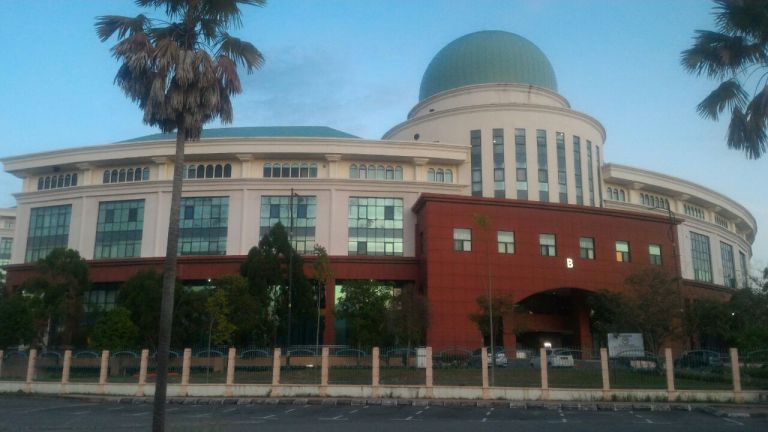 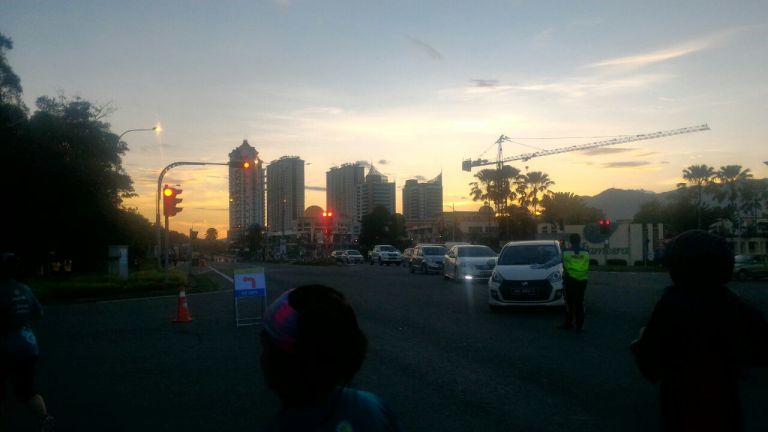 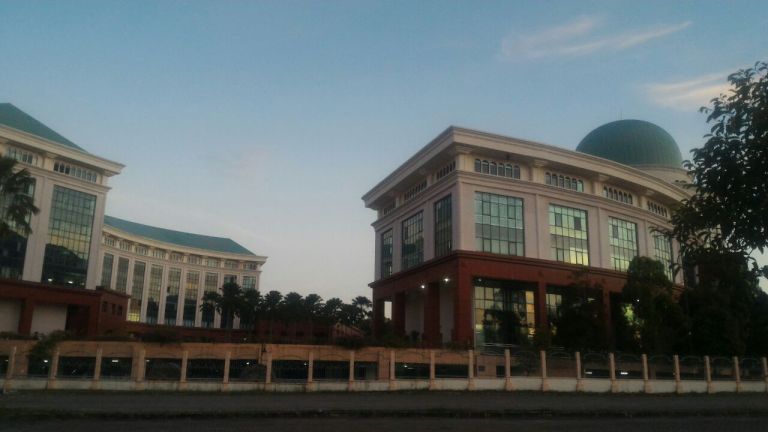 Kishor is also running in the near vicinity. On my requests he announces in his trade mark style

Soon we pass by an impressive City Mosque ( also referred as the floating mosque( due to partially surrounded by manmade lagoon), run over two back to back river bridges across Sungai Likas. We are going in loop. As we are running towards university, we will be coming back on the same route. There are volunteers as cheer leaders. 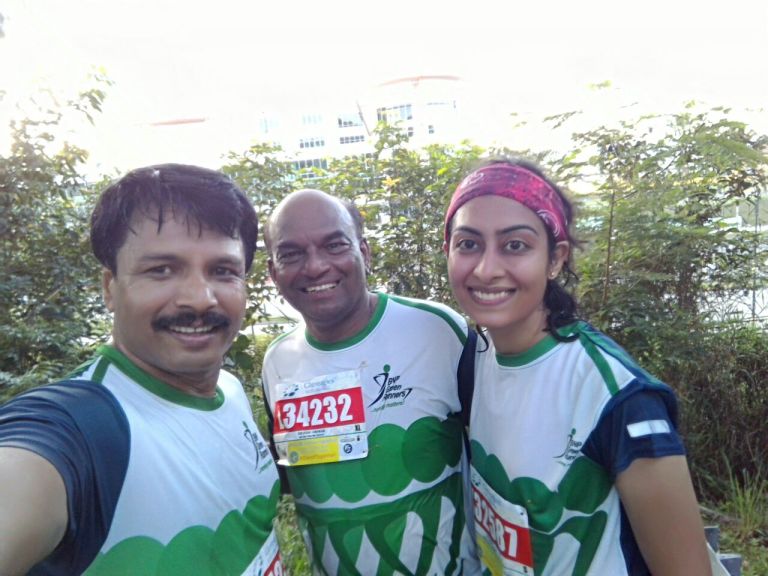 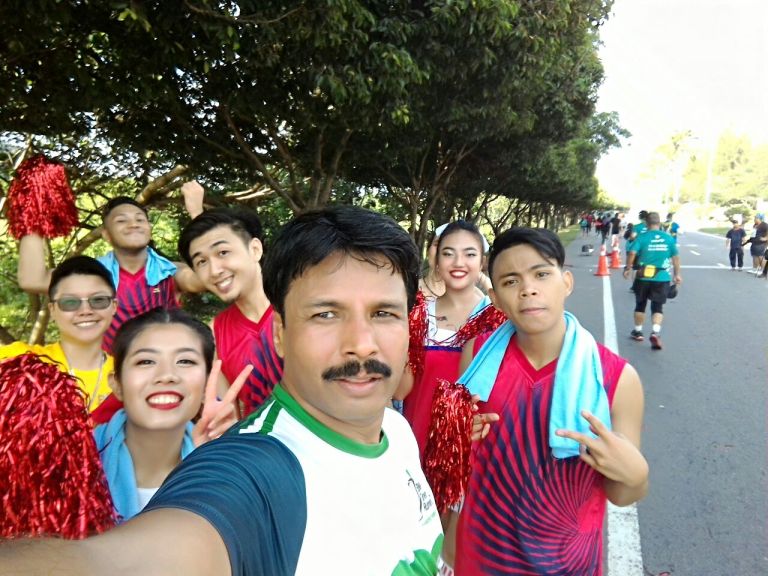 There is no involvement of locals in cheering or support. Vasai Virar Marathon remains the king of all the marathons when it comes to local people support.

Soon we are running towards main road going towards University of Malaysia Sabah.

The road is not totally blocked. One lane is reserved for runners. The other lane has two way traffic.

The route finally takes a long left turn as we enter the University Campus. It is huge and green.

One Caucasian lady trips and falls down .Before any one goes near her to help she gets up. Bruises are visible, but she remains a determined runner and resumes running.

Inside the University we get double shock as we encounter killer inclines with hill work of approximate 5 to 6 km !!

We are blessed with plenty of guides. If one counts number of guides who are giving us their services throughout the tour, ours cannot be an economical tour. There are around 7 guides/coordinators. 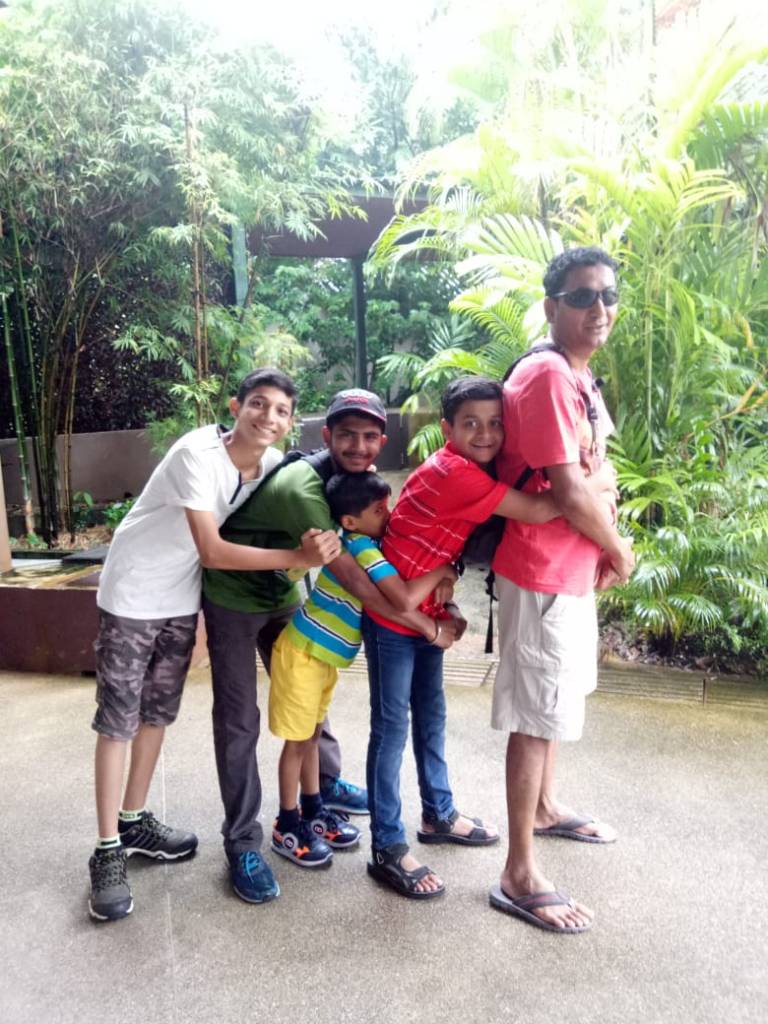 Mr Guru is with us from day one, I mean night one. He also loves photos, but his photos must have SOTC placard, (to give enough proof back home at lower parel office) which also acknowledges us with our BNPGR logo powered by SOTC (whatever it means) 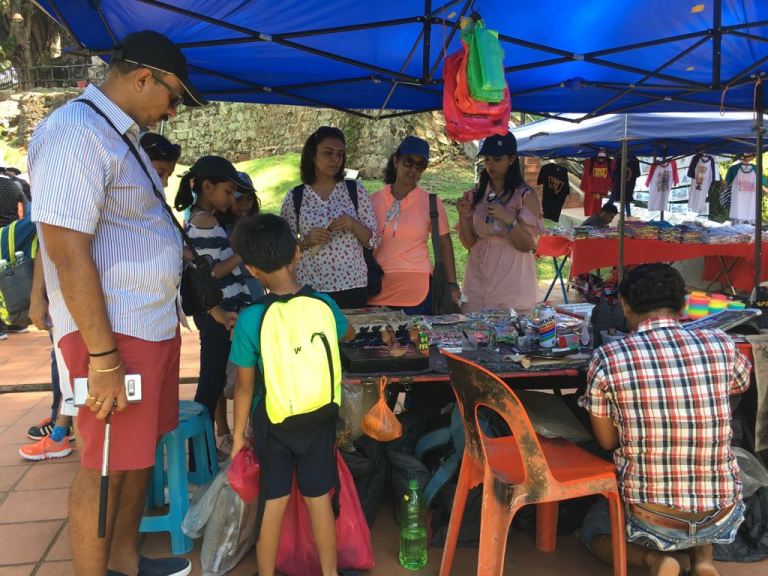 SOTC has given him a laminated A 4 paper size placard just to prove that ours is super economy tour. The other guides (wherever we go) are also most of the time leading Indian tourists. They may or may not be Indian guides but janta around them is always Indian (or Indian looking) every other guide has proper placard with a stand!!

Guru has spent umpteen no of years as “on field guide”. He has seen enough life as it got unfolded around him .We are one of the most decent group he has ever encountered. 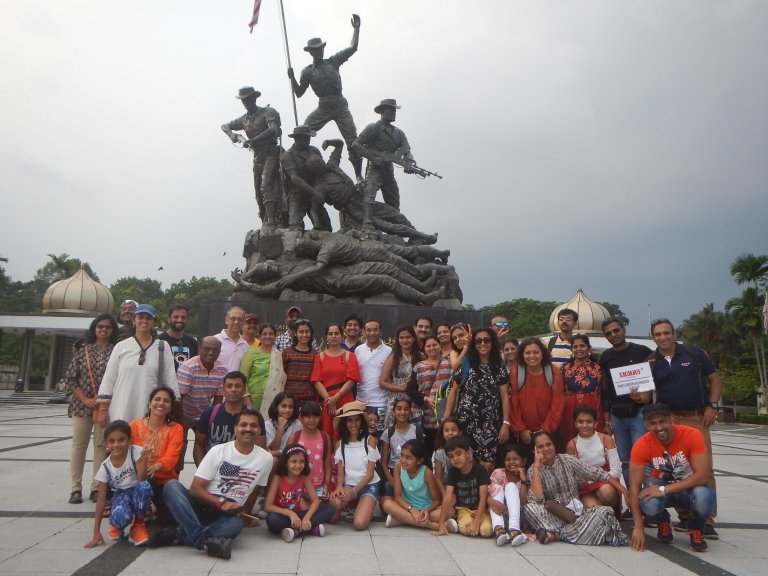 In past he has taken large MICE (Meeting, incentives, conferences and exhibitions) groups.

Any one dealing with MICE group to exotic destinations like Thailand can give a lot of real life masala ( material ) to film directors to deliver spicy situations on silver screen.( with disclaimer that the incidents depicted are purely fictional and has no resemblance with any one and are in no way are even inspired by real life stories )

During Thailand MICE tour, Respected Doctors( during the thriving practise at his home ground )or any respected figure back home can be so drunk/desperate(and fully nude ) that he can chase a half nude ( but desperately covering her vitals with whatever cloths /bed sheet ) girl in the hotel lobby, just to convince her that his demands are quite decent.

Bhagwan Das (Malaysian Punjabi family man) is the senior most guide with 35 years of experience. He is one of the two full time guide throughout our West Malaysia tour.

He is old and ideally should retire and play with his grand children. He is extremely knowledgeable but repeatedly gets lost as he deviates from the topic. In past he has worked with government .This makes him quite authoritative in his approach. He always starts with positive note but ends up with a lot of negative talks and opinions. 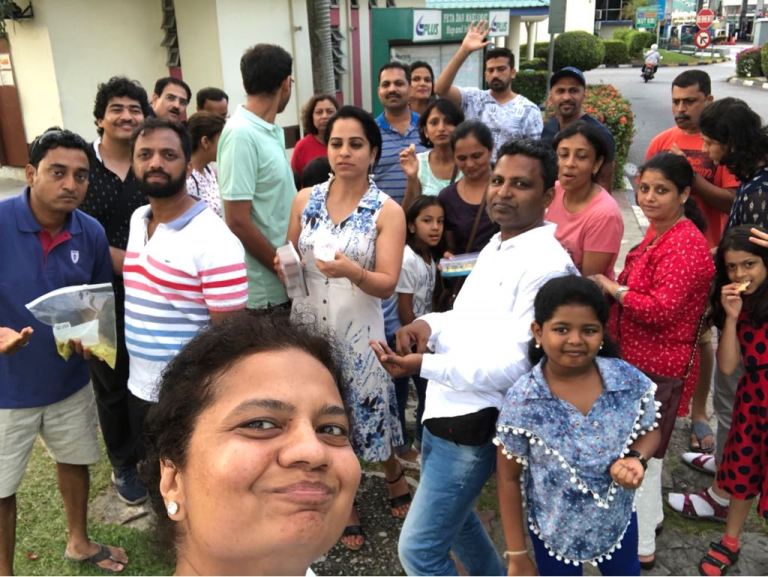 Children and their existence makes him mad. What starts as little tiff becomes almost continuous war as our kids soon give a damn to bhagawan uncle. They occupy the last few rows of the bus and behave as if they are in India. 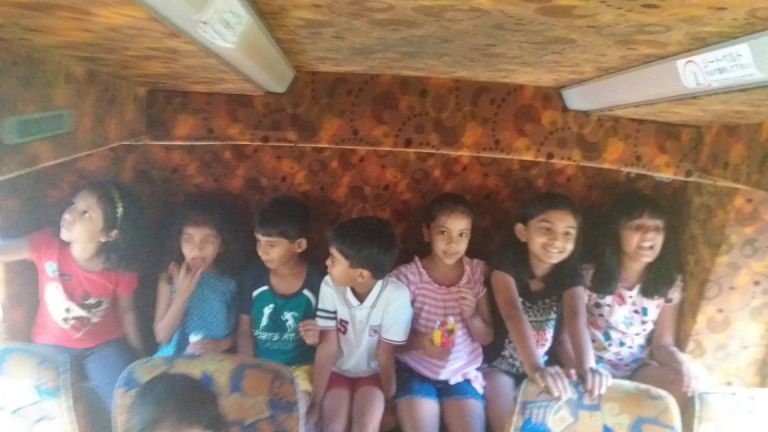 Though we all learn a lot about Malaysia, culture, economics, bhumiputra policies, the ongoing elections,

the extremely over hyped dangerous situation ( by Mr. bhagawan )where in after 1969 Malaysia can erupt any time during our tour . He slowly starts getting on nerves of ladies. Once there is small jugalbandi between Mr Bhagwan and Arpita which gives me an early indication of probable India –Pak war conflict kind of situation

Dilip is brought into the bus where kids and moms are in max number. Mr Bhagwan is having his tadipar (forced exile) as he handles all the matured people in the other bus. Oh Moms and kids love it.

Dilip is somewhat Indian and Chinese Mix descendent. He is what a guide must be. Always smiling and laughing. (And smoking in some corner whenever he gets a chance)

He is approachable and quite open. He is frank enough to admit if he is not aware of some facts. (Which becomes big ego issue with Mr Bhagawan who knows everything?) Once we both ( me and dilip ) have nonstop positive jugalbandi where in I keep asking questions and he keeps up with good show with my rapid fire questions about everything related to Malaysia. At the end of our bus journey my fellow bus members (the matured crowd) want me to get tadipared (shifted to other bus) as good riddance. 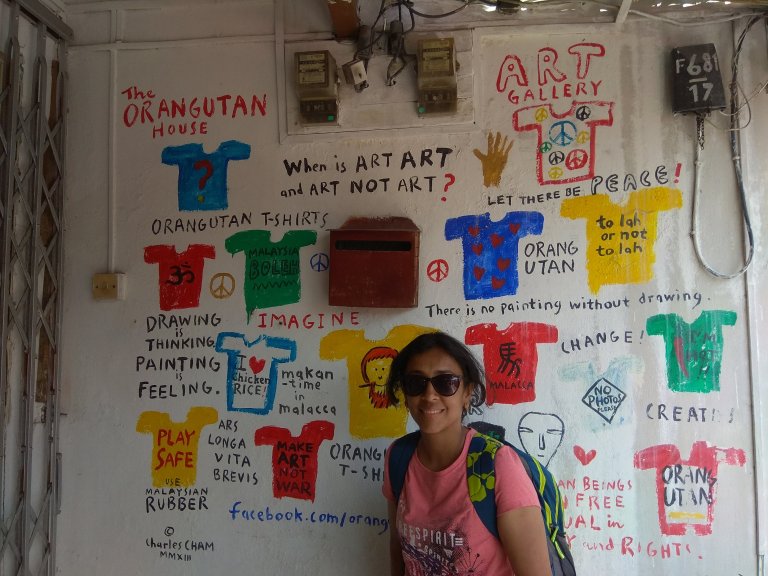 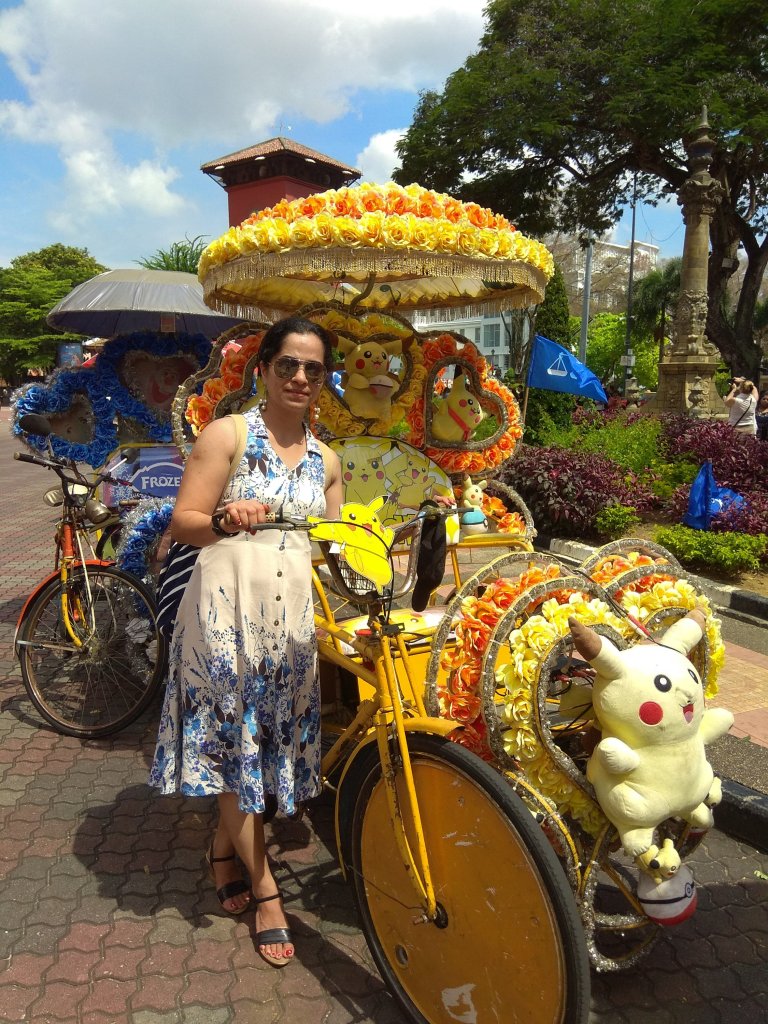 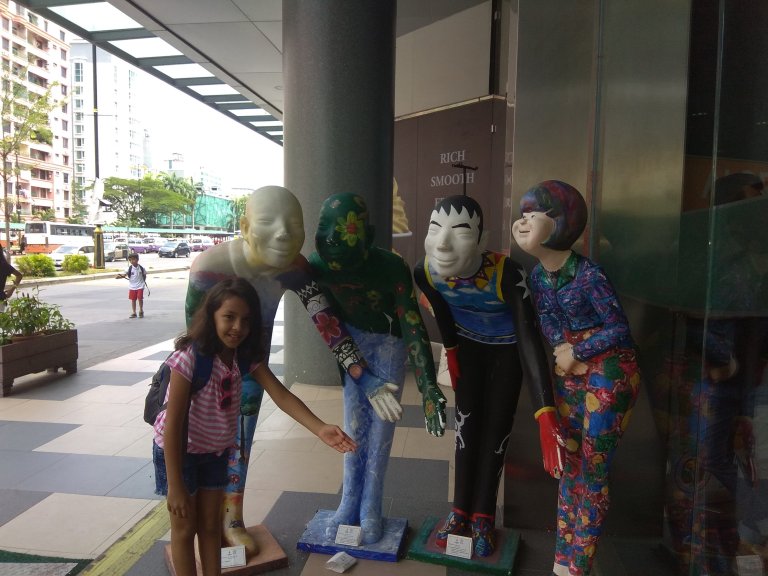 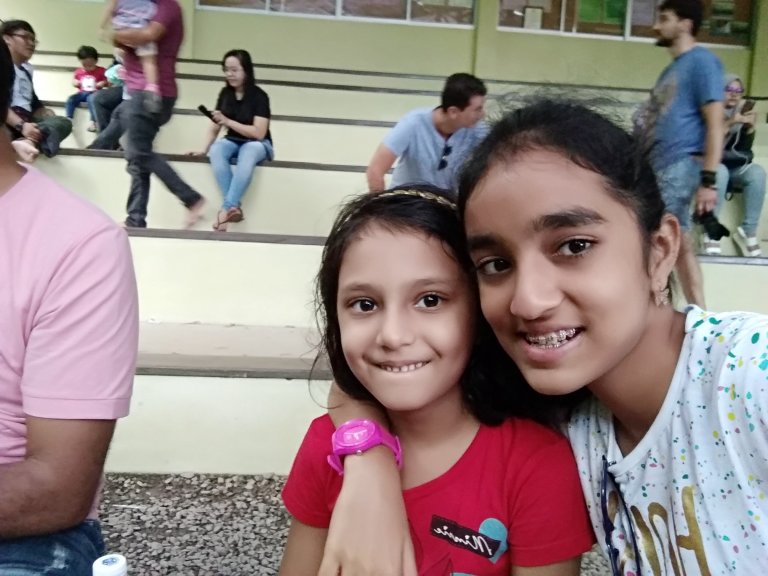 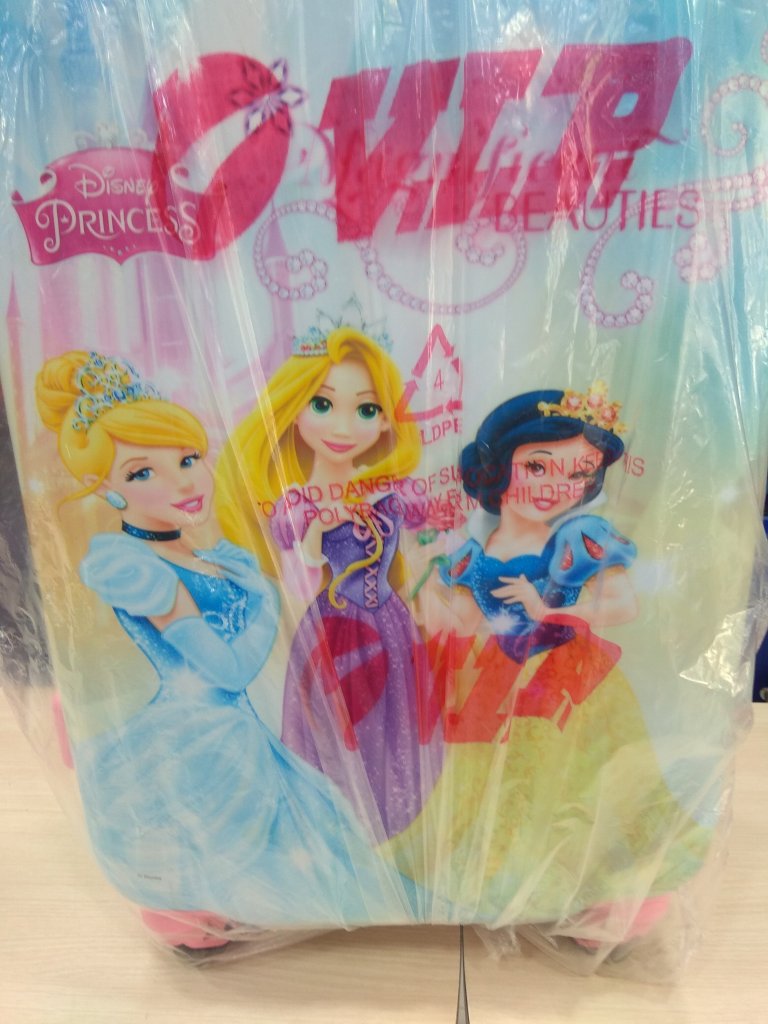 wo more local guides are with us during our Kota Kinabalu .David and???/They both are enthusiastic and want to give a lot of gyan. Sunita, Shital and Kamal are our chosen team members who go on with their nonstop satsang on Sabah and Kota kinabalu. Others remain occupied with all the new excitement, pre and post emotions related to BNPGR’s 1st international marathon. Some are still pinching themselves…is all this really happening? Am I really thousands of kilometres away from treacherous western express highway –Mumbai?

Abdullah is our guide in Singapore. Initially his prime aim is to scare people.

“Why on earth did you come to Singapore??/”

“Singapore is very costly pace. Everything is at a cost except air and water which you never know may get taxed soon “

His favourite dialogue “Singapore is fine city, full of fines “

In spite of his extreme and a kind of contradictory approach wherein he keeps praising his city (or state or country: all same) and scaring his guests (as Singapore sees mostly Indian tourists, India contributes immensely to Singapore (and its economy. If Indians stop going to Singapore , it may create serious issues ) we all still love our tour as Singapore is extremely green , clean , efficient ,tourist friendly and impressive.

Beyond his opinion about his own city-state-nation state he is extremely efficient and has a great style in dealing with kids.

He is also little flexible and has smile on his face. In his fine city he periodically takes breaks to smoke his cigarettes just to generate a little more carbon dioxide to support trees.

Me to Abdullah: “what is the most interesting and attractive aspect of your profession which you like the most?

Abdulla to me: “Oh someone 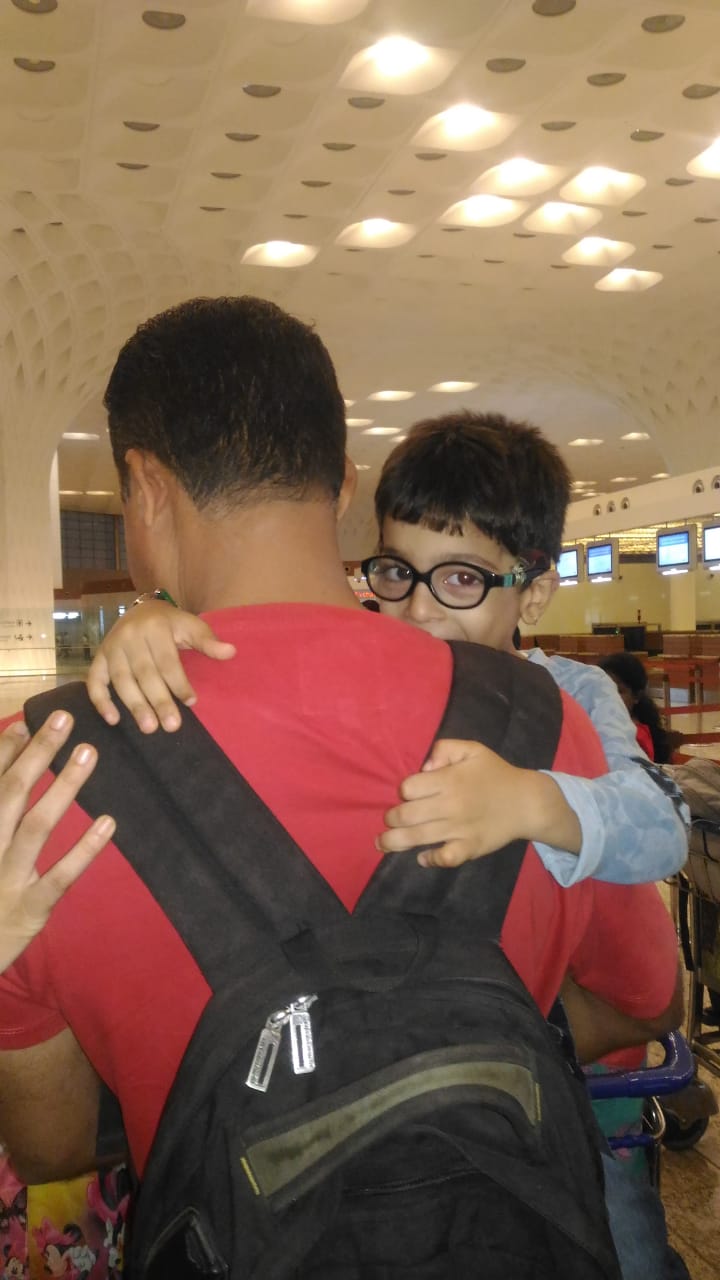 I have been active in the field of an engineering business and its various aspects since class 10. Innovation & creativity is what inspires me the most and that is a reason, I already own few patents and have applied for a few more as an ongoing process. Apart from being an engineer, I am a runner, certified marathon coach, writer a traveller (who loves to stay with local families in remote locations), a keen observer, a trainer and a poet. I live in Mumbai View all posts by shailesh